Los Alamos National Laboratory (LANL) Foundation supporters Susan Seestrom and Chris Morris have created a scholarship fund honoring their daughter Sheila Morris Luna and their own life-long commitment to science. Sheila recently passed away after a career as a biomedical researcher who went on to a second career as a certified clinical herbalist and nutritionist. They seek to provide financial support to young women with a similar passion and a desire to pursue STEM career at a New Mexico college or university.

The Sheila Morris Luna Memorial Scholarship Fund prioritizes women with a high level of financial need who are entering college as freshmen. The initial endowment will provide a $20,000 four-year scholarship ($5,000 a year for up to four years) to one recipient annually for at least the next five years.

Northern New Mexico women are underrepresented in STEM careers. Both Chris and Susan have a deep love for Northern New Mexico and increasing opportunities for area residents has been a passion for Susan since she sat on the LANL Foundation board in its early years. She embraced the Foundation’s vision of investing in educational programs for the communities that many LANL employees call home.

“I really feel connected to the communities of Northern New Mexico. It’s one of the most special places in the world,” Susan said. “Helping more young women with an emphasis on those who need financial assistance is the difference that I want to make. I entered college when a fine college education was quite attainable, even for a middle-class family. I have seen the difference an education can make, and the difference my own education has made for myself and my children. “

Susan and Chris met at Los Alamos National Laboratory. Both have PhDs in nuclear physics. Their professional and personal lives have made them aware of women’s issues, including raising five daughters who have all pursued higher education, with degrees in biology, herbalism, physics, chemistry, biophysics, education, law and medicine.

“I’ve been sensitized to women’s issues a little bit, even though I’m not a woman,” Chris said. Seeing how women’s roles at LANL have grown over the years has also raised his awareness.

“When I started at the lab, virtually the only women were administrators, and they were called secretaries at the time. It was a very different place to work,” Chris said. “I’ve watched the lab become more diverse. I’ve seen more women come to the lab as scientists and in the workplace, and it’s a huge improvement.”

Susan is one of the women who contributed to those changes, serving in both research and management roles. She was the first woman leader of the Physics Division and the Weapons Physics Directorate. In 2006 she became associate laboratory director for Experimental Physical Sciences. In 2012 she returned to research as a senior fellow working with colleagues, including Chris, to make an important measurement of the lifetime of the free neutron. Her career took another turn when she was asked to join the team that won the competition to manage Sandia National Laboratories. She is now Sandia’s associate laboratory director for advanced science and technology and chief research officer.

“I have had a wonderful and exciting career, with huge opportunities, and it’s all because I was able to get a good education,” Susan said. “We’re on the path to achieve gender parity in science, but to succeed everybody needs a chance. We need all the talent we can get. There are few girls in science, so educating those girls helps the diversity and feeds the pipeline these national labs depend on.”

The couple’s support for education went international when they visited one of their daughters in Nepal while she was serving in the Peace Corps. Their desire to help the women and children they encountered in the streets found an outlet through Hands in Outreach (www.handsinoutreach.org), a nonprofit dedicated to lifting Nepalese girls out of poverty by providing access to education. The couple has supported primary education for five or six girls and Susan has served on the board. A course Susan took on international development reinforced the idea of education as a force for change.

“The first thing I learned is that most things you do just make the situation worse,” Susan said. “It made me believe that the one thing that is not going to screw anything up is education, because the person who gets it has to buy into it. These kids who have the opportunity to get into school thrive.”

Susan and Chris hope this scholarship will help others enjoy rich careers in science as they have done.

Susan originally planned to be a geologist but switched her major to physics when she learned that math was not part of the geology curriculum. She enjoys both management and the experimental side of science. Her work has included the study of parity violation in neutrons and fundamental physics using ultracold neutrons. She and Chris have worked together on two or three projects, including one called Tau which studied the lifetime of neutron. She wears a Tau tattoo in honor of that project. Her attraction to science is simple.

Science has been a part of Chris’s life since childhood. His father, who had a bachelor’s degree in chemical engineering and a master’s in petroleum geology, would take Chris and his brother on excursions to hunt minerals and bring chemicals home to do experiments for his sons. Chris’s profound love of science continues to this day. He’s currently a Scientist 6 at the lab, working with proton radiography and ultracold neutrons. He often tells Susan, “I can’t believe they actually pay me to do this. It’s quite a joy to go to work every day.”

“And that’s what education can enable,” Susan said. “A job where you enjoy going into work every day.” 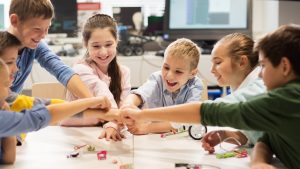 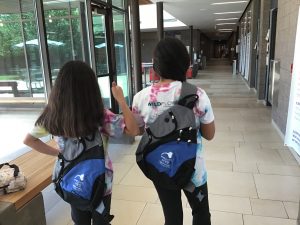 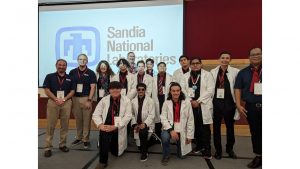